In recent months, several important discoveries have been made and published in journalistic media around the world. We tell you the details, the words of the researchers and why Patagonia was the land of Dinosaurs. We also publish important information to visit the main Dinosaur museums in the province of Neuquén.

Without fear of being wrong, we can name Patagonia land of dinosaurs, each time new species are discovered that dazzle scientists and researchers around the world. The discovery of a new species that inhabited North Patagonia, specifically in the province of Neuquén 140 million years ago, shows something very important, that titanosaurs originated at the beginning of the Cretaceous period. The fossil remains were found in the middle valley of the Limay river, between the towns of Picún Leufú and Piedra del Águila. They were found in outcrops of the geological formation known as Bajada Colorada that shows its reddish rocks to all the travelers that drive Route 237 to Bariloche. The researchers who work there emphasize that every new thing they find is absolutely amazing. “There, we have also found different groups of carnivorous dinosaurs and other groups of herbivorous dinosaurs.”

According to the Scientific Dissemination Agency of the University of La Matanza (CTyS-UNLaM), the so-called Ninjatitan zapatai is a new titanosaur from Patagonia, the oldest of its group, with a length of 20 meters and 140 million years old. , which shows that this species of dinosaur originated at the beginning of the Cretaceous period. In addition, the great importance of this discovery was pointed out because “until now these gigantic quadrupeds with an antiquity greater than 120 million years were not known, so the finding of Ninjatitan zapatai has great relevance for the knowledge of evolutionary history from this group and from the early Cretaceous.” 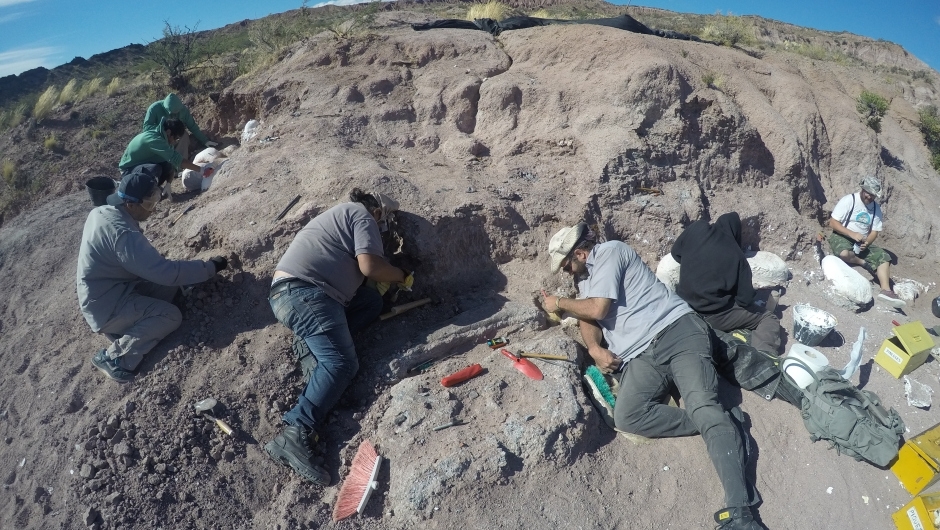 The discovery began in 2010. Paleontologists from Conicet belonging to the Paleontology Area of the Azara Foundation and the Maimonides University, such as Pablo A. Gallina, and Juan Canale, from the Research Laboratory of the “Ernesto Bachmann” Municipal Museum, from Villa El Chocón, Neuquén, had been working on various finds that include both long-necked herbivorous and carnivorous dinosaurs of various sizes, dating from the early Cretaceous, around 140 million years ago.

Pablo Gallina is the main author of the study that has been published in the scientific journal Ameghiniana, he is also a researcher at the Azara Foundation at the Maimonides University and the National Council for Scientific and Technical Research (CONICET), he indicated that “the greatest importance of this fossil Apart from the fact that it is a new species of titanosaur, it is the oldest record in the world for this group. This discovery is also very important for the knowledge of the evolutionary history of sauropods, because the fossil records from the beginning of the Cretaceous, about 140 million years ago, are really very scarce around the world ”.

In 2014, Jonatan Aroca, technician of the Municipal Museum “Ernesto Bachmann” found the first remains of a new dinosaur at the foot of a rocky wall. There the scapula was recognized as the first obvious bone, and it was extracted, “there we noticed that it was a very important discovery and we prepared everything to be able to continue working the following year in that stratum”, according to Dr. Juan Ignacio Canale since Time issues could not advance with the excavation that season and it was decided to continue the following year. Once the materials had been extracted and after being prepared and technically cleaned in the Museum’s laboratory, it was determined that it was a new species of titanosaur sauropod .

“In the following campaign, three vertebrae and some bones of its hind legs appeared; a part of the femur and what would be its fibula. A priori, due to the age of this material, 140 million years old, it could be assumed that it was a form prior to the origin of titanosaurs, in Patagonia titanosaurs were known less than 120 million years old ”, stated the doctor. José Luis Carballido, researcher at the Egidio Feruglio Museum and CONICET. The study revealed that “Ninjatitan zapatai was a titanosaur, being the oldest in the world with tens of millions of years of difference from those previously known.”

The new species was named Ninjatitan zapatai. The proposed name refers to two extremely important people in relation to the work that the authors have been developing. One of them is the paleontologist Sebastián “Ninja” Apesteguía, who led the first explorations of Bajada Colorada and made several important contributions to the paleontology of Cretaceous vertebrates in our country. The other, the technician Rogelio Zapata from the “Ernesto Bachmann” Museum in Villa El Chocón, who carries out the technical work, from extraction in the field to cleaning and preparing the fossils for his study.

Ninjatitan joins the team of titanosaurs from Patagonia that have made strong appearances in recent times: in 2017, the world’s largest titanosaur, Patagotitan mayorum, a native of the province of Chubut, was unveiled. He was accidentally discovered by a rural laborer who saw a bone sticking out of the ground in the field where he worked. Fortunately, the owners of the estancia notified the Egidio Feruglio Paleontological Museum (MEF) and after more than three years of excavations, CONICET scientists announced the discovery of fossil remains of at least six specimens of the largest dinosaur known up to that moment.

The team of paleontologists that led the campaigns presented the new species, called Patagotitan mayorum, in an article published in the prestigious journal Proceedings of the Royal Society B in which they describe the remains found and study the evolution of gigantism in this group. of dinosaurs.

“It is named for the region and for titan, which means giant. Mayorum honors the Mayo family who are the inhabitants of the area who gave notice to the Museum and received us in their field while we carried out the excavations. We found more than 150 bones buried in rocks from the Lower Cretaceous, that is, a little more than 100 million years ago. We calculated that it was almost 40 meters long, its neck 12 meters, and it weighed 70 tons. Other very large species of approximately the same age have been found in Patagonia and one of the things we discovered is that these giants were closely related to each other, they belong to the same clade – a grouping that contains a common ancestor and all its descendants. That tells us that something special happened for these species to have developed extreme gigantism. This Patagonian family broke the mold ”, explains Diego Pol, CONICET principal investigator at the MEF.

José Luis Carballido, deputy researcher of the Council in the same Museum, clarifies that although they cannot specify the reason for this increase in size, they believe that it is related to other environmental changes that occurred in that period, such as the increase in temperature. globally or the diversification of flowering plants, which were simultaneous events and are probably related to each other. A better climate in these latitudes could have resulted in a richer and more abundant flora, which implies greater availability of food and food resources to reach that size.

Paleontologists highlight as an interesting feature, in addition to its dimensions, the amount of preserved remains. The most common for these species of giants is that they are known from very fragmentary fossils such as Argentinosaurus, of which only a dozen bones are known, or Puertasaurus, of which four bones are known.

Ernesto Bachmann Municipal Museum Villa El Chocón. The museum has that name as a tribute to a self-taught researcher who made important anthropological and paleontological discoveries in the area surrounding Villa El Chocón. In addition, he was a guide and advisor to various national and international researchers. Bachmann, was born on February 1, 1894, in Switzerland, and died on March 19, 1970, in the city of Plottier. Its main attraction is the largest known carnivore and the story of its discoverer, the mechanic Rubén Carolini.

Municipal Museum Carmen Funes in Plaza Huincul. The name pays homage to Pasto Verde, the first registered population in the area, it was inaugurated on November 1, 1984. At present, it is directed by Paleontologist Rodolfo Coria, who together with a trained and efficient group of technicians, maintain the rooms are constantly updated, in parallel with the field and research tasks that are being carried out without pause. The original pieces of the herbivorous giant Argentinosaurus huinculensis and the local history of oil exploitation are highlighted.

Museum of Geology and Paleontology of the National University of Comahue – Dino Project in Lago Los Barreales. It is the largest deposit in South America. They have the largest known carnivore and one of the largest herbivores, it represents one of the few windows to the past that allow us to know the complete Cretaceous ecosystem. Recommendations: The tour lasts about three hours. Contact before going to verify opening hours, to rent a vehicle, and it is recommended to bring some supplies as businesses are at great distances.

Professor Juan A. Olsacher Provincial Museum of Natural Sciences , in Zapala. The Museum opened its doors on May 24, 1969 with its first director Don José Ignacio Garate Zubillaga, who donated his collections for the beginning of the museum. Later, on May 24, 1972, by decree 1188, it was decided to give it a name and the one chosen was “Prof. Dr. Juan Augusto Olsacher ”. It is exclusively dedicated to biological sciences, predominantly mineralogy and paleontology in the Province. It has very important collections of type pieces, becoming by this condition a paleontological repository. The oldest dinosaur in Neuquén. A bird in which seeds were preserved that he ate shortly before he died. The museum also has the most important mineralogical collection in the country.

Museo Paleontológico Municipal Argentino Urquiza , in Rincón de los Sauces. They have the most complete titanosaur fossil ever found and more than 400 pieces from other dinosaurs. The rocky outcrops of sandstones, limonites and clays are carriers of a rich and varied fossil flora and fauna of dinosaurs, some of which are currently in the extraction, cleaning and preparation stage.

Municipal Museum of Las Lajas . It was inaugurated in March 2019. It specializes in spelology, the study of caves, since in that area there are many that can be visited. They will also repatriate dinosaur fossils that until now are in the Plaza Huincul Museum. Address: Saavedra 474, Las Lajas.

You may also be interested in reading: “Jurassic Park” in Southern Patagonia by Dra. Patricia Sruoga