It all started on new year’s eve when I gave to my parents a special gift, a trip to The Glaciers, in Patagonia, province of Santa Cruz. It was a big surprise and a moment of great emotion, especially for my dad who had never traveled by plane….

And the day came… we had packed our bags, we live in Quilmes, so some friends took us to the Ezeiza International Airport, from where the flight to El Calafate would depart. My dad was very anxious, but the flight was a beautiful and peaceful experience, with the sky completely clear it was an excellent day to fly. The flight attendants were very attentive and courteous, we flew by Aerolineas Argentinas. 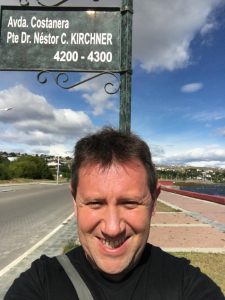 Upon landing in El Calafate, we hired a transfer that took us to MIRADOR DEL LAGO Hotel, facing the lake. In the afternoon we toured the beautiful Calafate center, we had a snack and got in touch with the person who would guide the trip to The Glaciers, so we arranged the excursion’s details for the next day. By the way, we bought the excursion on AVANTRIP as a travel package.

Then we went to a supermarket to buy some sandwichs to take away, since the only place to eat, located in Los Glaciares National Park, at that time, it was closed for renovations.

Later, we had a gourmet dinner at the hotel restaurant, it wasn’t a large menu, but the food was exquisite and it should be noted that all the hotel staff were very friendly.

The next day we got up and got ready while the transfer arrived that would take us to the place where the boats that run along the Perito Moreno Glacier depart from.

It was a beautiful journey to the destination, I remember that on a curve in the road, we saw that majesty in the distance … I will never forget it !!! then the driver stopped and we had a hot chocolate, seeing in the distance what we would later have nearby.

We arrived to the port and boarded the ship, in order to be sheltered from the cold wind, and finally set sail…. What a unique and unforgettable experience in every way, we really enjoyed the tour with my parents, admiring the landscape, we decided to go up to the open part on top of the boat, and I think that because of the extreme emotions, we hadn’t felt cold at all…. The wind brushed our faces, until we got closer… 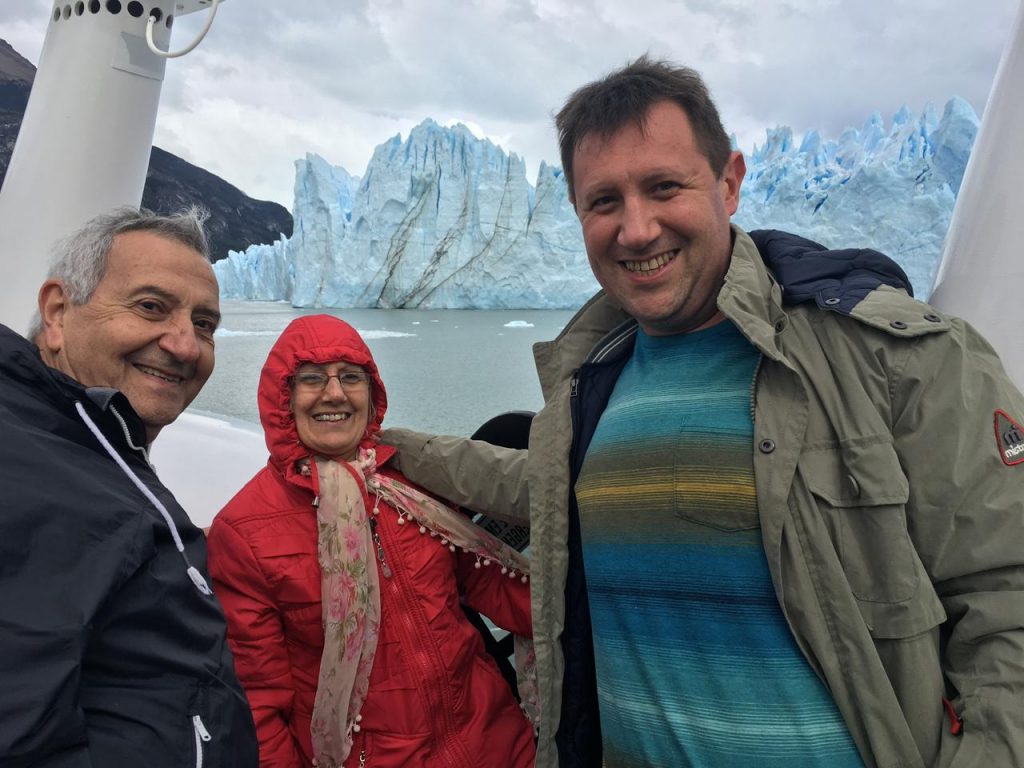 It was something dreamed of, a marvel, we could see several small landslides, until at the least expected moment we felt a great flash and a silence and wow… it was terrible to see how the large proportion of ice fell into the water…. Being able to have filmed that unique moment that we will never forget … We only stayed in silence, looking at such beauty of nature, later the ship left, starting back, looking at what we left behind without saying a word hug my parents … I will never forget it … it was a very special and exciting moment.

When we returned, the charter people were waiting for us with another delicious hot chocolate…. And we started the walk along the walkways that run along Lake Argentino to admire another part of the Perito Moreno Glacier. Later, in a parador seeing that landscape, we ate the sandwiches and continued on the road. 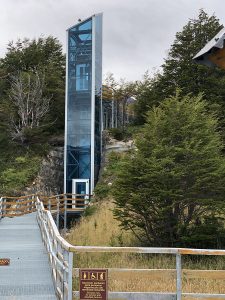 It should be noted how well we found all the facilities of the Los Glaciares National Park, everything is very well marked and maintained. The circuit has walkways and trails with railings so that people can travel it without age limits and can calmly admire such beauty, it is advisable to wear comfortable shoes and waterproof clothing …

There is another excursion that you can consult where you can walk on the glaciers and enjoy drinking whiskey on them, with the people who organize this excursion specially trained for that activity …

Later, after touring the trails, we returned where the charter was waiting for us, who returned us to the hotel to rest, since the next day we got up early and walked along the waterfront to buy some things and prepare for the next excursion to El Chaltén. that for such an excursion one must be prepared according to one’s personal objectives.

It can be consulted at the Calafate tourist office or in El Chaltén, since there are certain requirements. You also have to be prepared, basically with comfortable shoes, bring water, and appropriate clothing …

That night we had dinner at a restaurant a bit far from the center of El Calafate, it is called DON PICHON. You can call and reserve, with a view of the very beautiful city, taking into account that it gets dark very late you start to dine practically during the day, there we enjoy an exquisite barbecue, it has an extensive menu with affordable prices. 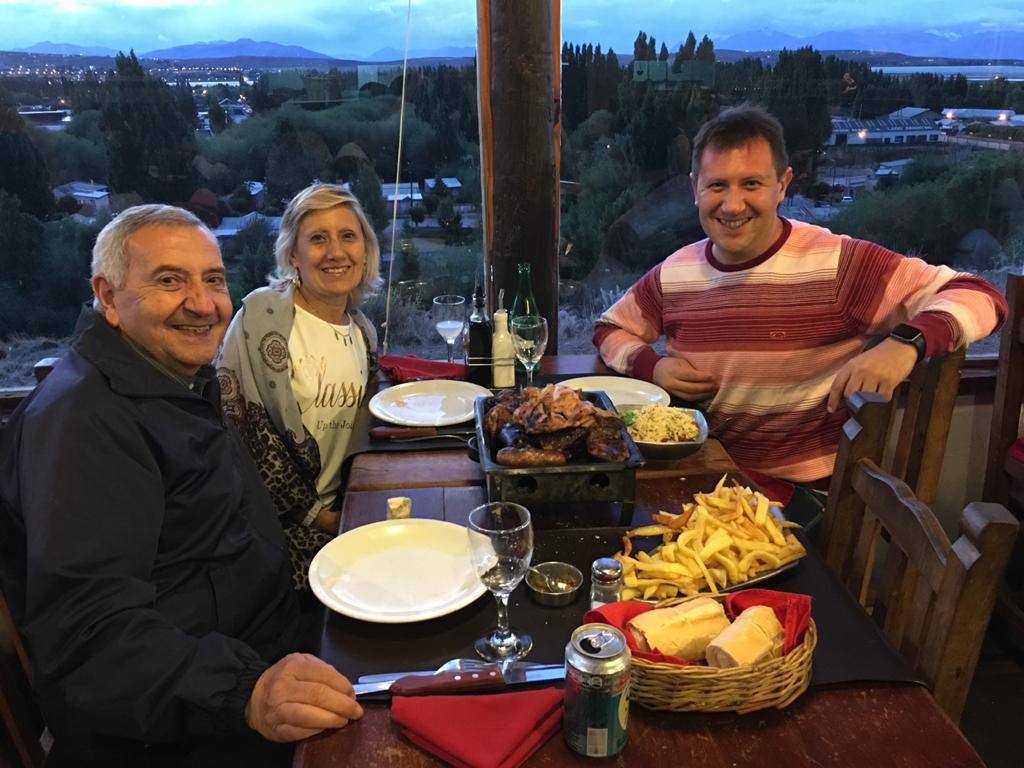 The next day we started the excursion to Chaltén, a tour of totally picturesque landscapes where there are several inns where you can take pictures, before arriving we already saw the imposing Mount Fitz Roy, in its majesty with its snow-capped peaks….

We started the walk with my parents towards the first paradors, their view from above is not to be forgotten, the path, although marked, is not the safest depending on the ages, and on a rainy day it could be dangerous. On certain occasions, the National Parks guards, do not allow the entrance. 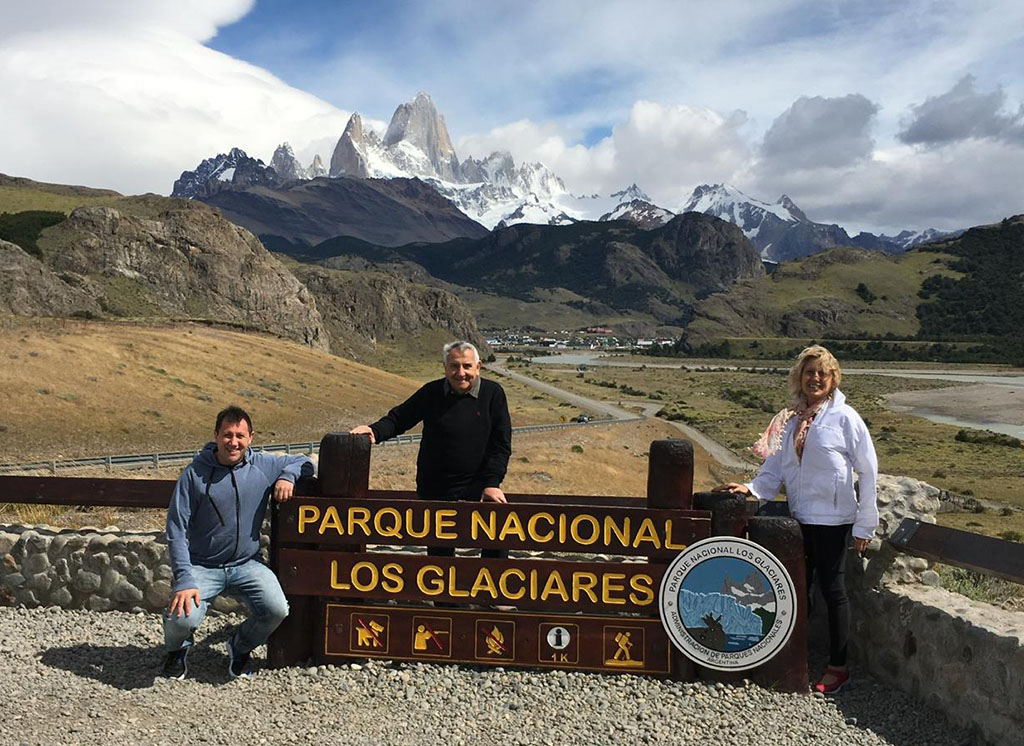 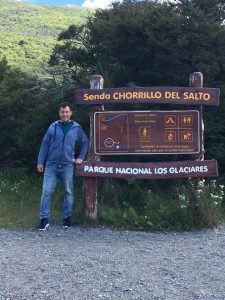 Then we went down we start the route towards a waterfall, a few km away to the CHORRILLO DEL SALTO, a beautiful place where we had some mates (our national infused drink) Here you can be refresh by the cold water that comes from the snowy peaks, after that we had a snack in El Chaltén town, and we returned to El Calafate.

Finally, we had our last day to relax, walking and visiting some places at El Calafate main street. And in that mood we returned home, extremely happy… after a few day of this beautiful trip, visiting amazing places and landscapes  that we will never forget. Thanks for reading my story, if you liked please leave a comment down below.

Besos43
Breathtaking There are not enough adjectives to explain the natural beauty of the glaciers and the park. This definitely belongs on everyone's bucket list. If you have walking problems you won't be able to see all the sights. Their is a metal stairway/walkway that you follow throughout the park with many steps. There is a restaurant/bar with restrooms, drinks, and food. A wonderful day!